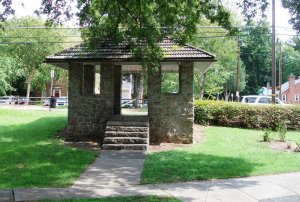 Staff from the City of Raleigh Transit Section worked diligently to see that this minor but historic structure was refurbished to high standards. Part of the Raleigh trolley system of the early 1900’s  the shelter had fallen into disrepair and was at risk of major structural failure if not rehabilitated. Project scope included lead paint abatement, rehabbing the roof structure, replacement of missing stones, and installation of copper gutters to the match the originals (damaged vinyl gutters were removed). In addition, the terra cotta roof tiles were replaced, matching the exact mold and color of the original tile. This project exemplifies the level of stewardship one hopes for in a public entity, and saved a piece of the City’s history for continued use as what is easily the most elegant and commodious transit stop in the City.

Diamond Contracting, along with their partner, RLS Commercial Interiors, was recognized by the Architectural Woodwork Institute for the design and execution at the new Leith Lincoln Dealership on Capital Summit Court in Raleigh. To access the digital version of the...

We are honored to be General Contractors Magazine's North Carolina choice for the Best Dealership and Auto Showroom Contractors in the US.  Thank you to the Mercedes-Benz of Cary and the Leith Cars organization for the partnership.  The link to read more is...

We had a blast again this year at Five County Stadium with our family and friends. The Cat's Crew was amazing as always!